Who owns the most ethereum? Biggest ETH holders – Capital.com

Who owns the most ethereum? Biggest ETH holders – Capital.com

Scan to Download ios&Android APP
What is ethereum?
Ethereum use cases
Ethereum supply: How many ether (ETH) coins are there?
ETH supply after PoS migrating
Who has the most ethereum?
What do analysts view of Ethereum?
FAQs
By Fitri Wulandari
Edited by Alexandra Pankratyeva
10:00, 31 July 2022
Ethereum’s long-awaited upgrade to a proof-of-stake (PoS) consensus mechanism is set to begin in the third or fourth quarter of 2022. The event is expected to increase scalability and adoption rate for the second-largest cryptocurrency by market capitalisation, ether (ETH).
What are the major ether use cases? Will ETH supply change after migrating to PoS? Who owns the most ethereum (ETH) coins? In this article, we discuss the project in detail and find out more about ethereum holders.
Ethereum is the world’s leading smart contracts blockchain. Its native cryptocurrency, ether (ETH), is the second largest after bitcoin (BTC), with a market capitalisation of more than $200.71bn at the time of writing (28 July).
Founded by Russia-born, Canadian programmer Vitalik Buterin and a host of co-founders, including Gavin Wood, Charles Hoskin, Joseph Lubin and Anthonio di Lorio, Ethereum debuted in 2015, preceded by a whitepaper published by Buterin in 2014.
In its whitepaper, Ethereum described a cryptographic ledger that allowed users to encode smart contracts and build decentralised applications (Dapps) within its blockchain.
Built on Bitcoin’s innovation, Ethereum has several differences with Bitcoin which was launched in 2009.
The role of Ethereum in the blockchain industry differs from that of bitcoin. The former is a platform for developing and deploying decentralised applications (Dapps) on its network, whereas the latter focuses on facilitating peer-to-peer decentralised payments.
In short, Ethereum could be compared to a market place of blockchain-based financial services, games, social networks, and other Dapps. According to State of the Dapps, as of 28 July 2022, out of 4,073 decentralised applications, 2,970 were built on the Ethereum blockchain.
Tokenomics is another distinction between the two leading blockchains. Unlike bitcoin, ether has no hard cap.
The Ethereum network is gradually expanding, as the total number of addresses continues trending up. According to Glassnode, it increased from around 10,000 addresses in 2015 to more than 155 million addresses in June 2022. 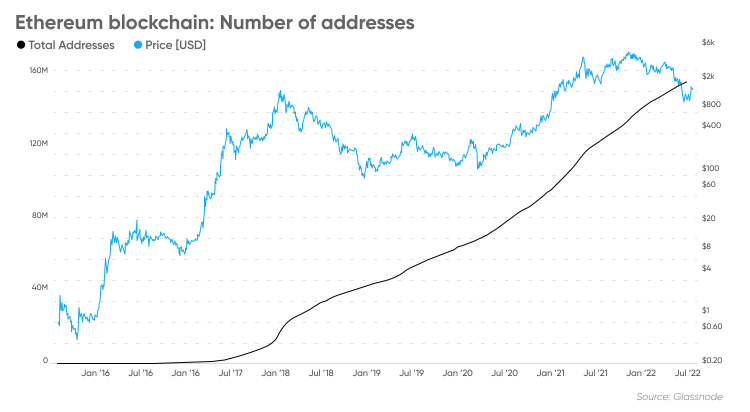 Bullish Bearish
88% 12%
You voted bullish.
You voted bearish.
Give ETH/USD a try
Ethereum smart-contracts helped the platform to become widely used in various sectors, from decentralised finance (DeFI), to gaming and non-fungible tokens (NFT) space.
Top 20 Ethereum-based tokens, as of 28 July, included: stablecoins, like Tether (USDT) and USD Coin (USDC); DeFi cryptocurrencies, like Uniswap (UNI) and Chainlink (LINK); and gaming cryptocurrencies, like ApeCoin (APE), Decentraland (MANA), The Sandbox (SAND) and Axie Infinity (AXS).
However, the dominance of DeFi applications on Ethereum blockchain has decreased lately, while NFT transactions have been growing. According to Glassnode’s data as of 25 July 2022, consumption of gas by NFT projects surged 6.2%, since November 2021, while DeFi application’s gas usage plunged from 27.5% to 15.1%.
#Ethereum relative gas consumption dominance by NFT activities has grown 6.2% since November, showing a continued market preference for NFT transactions.

Meanwhile, the dominance of DeFi applications has declined from 27.5% to 15.1%.

Live Chart: https://t.co/2UTVHIyjhm pic.twitter.com/2aAIQ39l2n
The Ethereum network began with 72 million Ether coins in circulation. A crowd sale conducted in July and August 2014 to fund the project’s development sold about 83% of its initial supply or 60 million.
In exchange for an ETH wallet address, the crowd sale participants sent a total of 31,000 bitcoin to a designated Bitcoin address. The participants were promised to receive the ETH that they bought when the network was launched.
The initial ETH price for the crowd sale was set at 2,000 ETH per BTC, and it was intended to progressively decrease to a final price of 1,337 ETH per BTC in the 42-day public sale that ended on 2 September 2014.
The crowd sale raised 31,529 BTC (approximately $18m at the time) in exchange for 60 million ETH, according to blockchain research firm Messari.
The total number of ethereum coins in circulation today differs from the early days. Following the launch of the Ethereum Mainnet in 2015, each block minted a new ETH. Block rewards, which were initially set at 5 ETH per block, have now been reduced to 2 ETH per block.
Ethereum does not have a fixed supply. As of 28 July 2022, circulating ETH supply totals 121.73m, according to CoinMarketCap. 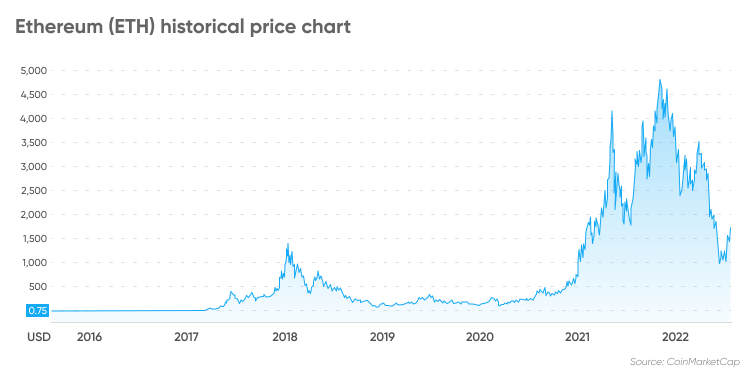 GME
AAPL
GOOG
TSLA
Ethereum is in the process of migrating to proof-of stake (PoS) consensus which will see ETH ditching its proof-of-work (PoW) miners. It will instead reward newly-issued ETH tokens to validators who have staked ETH tokens on the network.
The upgrade to PoS or known as ‘The Merge’ and ‘Ethereum 2.0’ is touted as the biggest event on the cryptocurrency markets. Validators depositing ETH through staking will reduce the circulating supply of ETH in the future.
The network said only 1,600 ETH a day will remain after the Merge, dropping the total issuance by 90%.
As of 28 July 2022, over 13.8 million ETH had been staked in anticipation of The Merge, removing approximately 11.5% of the coin’s current supply from circulation.
According to Glassnode’s data as of 9 July, Lido, a project offering a staking solution for Ethereum, accounted for 4.137 million ETH staked (31.8%), while the combined stake of three crypto exchanges Coinbase, Kraken and Binance accounted for 3.505 million ETH (27% of the total amount staked).
Total $ETH deposited in the 2.0 contract has now surpassed 13M $ETH, which is 10.9% of circulating supply.

By comparison, Coinbase, Kraken, and Binance combined account for 3.505M $ETH, 27% of the total. pic.twitter.com/krbxtQS9g0
The Merge is expected to happen later in 2022, which Ethereum said will reduce the energy required to secure Ethereum by about 99.95%.
There were 201.76 million ethereum holders as of 28 July, up from 199.58 million a month earlier on 29 June, according to CoinCarp.
Who are the biggest ethereum holders? The largest ETH-holding address was an ETH2 deposit smart contract which held over 13.1 million coins or close to 11% of ETH’s circulating as of 28 July, according to Ethereum data on-chain Etherscan and Coincarp.
The second largest ETH-holding  address was a Wrapped Ether smart contract with 4.28 million ETH (3.58% of circulating supply), as of 28 July.
The third and fourth highest amounts of ETH were deposited in wallet addresses identified as belonging to crypto exchanges Kraken and Binance.
Based on data from Etherscan, two unidentified wallet addresses in fifth and sixth places are top holders of ethereum outside those deposited in the smart contracts and crypto exchanges.
The two unidentified wallets had about 1.95 million and 1.49 million ETH tokens in them, respectively, representing 1.6% and 1.2% of the total ETH supply, as of 28 July 2022.
The two wallets mentioned above were the only two unidentified addresses among the top 10 ether holders. The remaining protocols were identified as smart contracts, cryptocurrency exchanges, and decentralised finance (DeFi) protocols.
It is unknown how much ETH holdings do early contributors and ethereum insiders currently have. In October 2018, Buterin disclosed his wallet address on Twitter. He added that he “never personally held more than ~0.9% of all ETH, and my net worth never came close to $1b.”
https://t.co/yLfy39gwB5

Though that doesn’t just include sales, it also includes some gifts and charity donations.
According to Ark Invest, Ethereum could displace many traditional financial services and ether (ETH) could compete as global money.
Anndy Lian, intergovernmental blockchain advisor, said Ethereum’s upgrade from PoW to PoS is a big move for the cryptocurrency market.
Cryptocurrency prices are highly volatile, including for ethereum (ETH) and bitcoin (BTC). It is important to do your own research on a coin or token to determine if it is a good fit for your portfolio. Whether ethereum (ETH) is a suitable asset for you will depend on your risk tolerance and how much you intend to trade.
When looking for ethereum projections, bear in mind that analysts’ and algorithm-based ETH crypto price predictions can be wrong. Their expectations are based on fundamental and technical studies of the cryptocurrency’s past performance, which offers no guarantee of future results. And never trade money that you cannot afford to lose.
According to CoinCarp, there were 201.76 million ethereum holders as of 28 July 2022.
There is no official data available. Data from Etherscan showed there were two unidentified addresses who are not smart contracts or crypto exchanges that hold more than 1% of total ETH supply. The wallet identity is anonymous unless disclosed.
No. Unlike other crypto currencies, Ethereum’s supply does not have a cap.

There are currently no responses for this story.
Be the first to respond.
Got a trading idea? Try it now.

Most traded
Why Capital.com?
Simple and intuitive platform
No commission
Competitive spreads
Join the 427.000+ traders worldwide that chose to trade with Capital.com
1. Create & verify your account
2. Make your first deposit
3. You’re all set. Start trading
CFDs are complex instruments and come with a high risk of losing money rapidly due to leverage. 81.40% of retail investor accounts lose money when trading CFDs with this provider. You should consider whether you understand how CFDs work and whether you can afford to take the high risk of losing your money. Risk Disclosure Statement
The value of shares and ETFs bought through a share dealing account can fall as well as rise, which could mean getting back less than you originally put in. Past performance is no guarantee of future results.
Risk warning: сonducting operations with non-deliverable over-the-counter instruments are a risky activity and can bring not only profit but also losses. The size of the potential loss is limited to the funds held by us for and on your behalf, in relation to your trading account. Past profits do not guarantee future profits. Use the training services of our company to understand the risks before you start operations.
Capital Com SV Investments Limited is regulated by Cyprus Securities and Exchange Commission (CySEC) under license number 319/17. Capital Com SV Investments Limited, company Registration Number: 354252, registered address: 28 Octovriou 237, Lophitis Business Center II, 6th floor, 3035, Limassol, Cyprus.
Start trading on ETH/USD now.